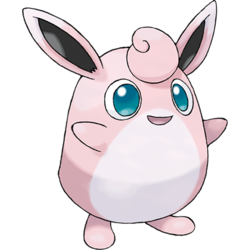 Wigglytuff (プクリン, Pukurin), known as the singing rabbit Pokémon, is a relatively large, pink, balloon-like Pokémon with a white underbelly, large blue baby-like eyes, a pair of large rabbit ears, and a twisty tuft of pink hair on its forehead. It evolves from Jigglypuff through a Moon Stone. In fact, it’s remarkably similar to its pre-evolved form, Jigglypuff, except the ears have grown larger and it now maintains an “oval” shape. Wigglytuff’s eyes are always covered by a thin layer of tears, so that if any dust gets into Wigglytuff’s eyes, it is quickly cried away. In the games, Wigglytuff’s fur is described to be “sublime”, so much so that if two of them come into close contact with each other, they are difficult to separate.

In Pokémon Mystery Dungeon: Explorers of Time and Explorers of Darkness, Wigglytuff is the guild master of the guild that the lead character is a member of.

IGN’s Pokémon of the Day Guy wrote that Wigglytuff was both “soft and cuddly”. IGN’s Pokémon Chick called it a “perky pink Pokémon” and that while Jigglypuff’s popularity was “mind-boggling”, once it evolves into Wigglytuff, it “has a tendency to sort of slip into the background”. She added that it was a “pity” because “this irritable, googly-eyed pastel mercenary is actually pretty cool”. Official Nintendo Magazine‘s Thomas East wrote that Wigglytuff’s name was amusing and that it could have made his list of the five best Pokémon names. Destructoid’s Ashley Davis wrote that cute evolutions such as Wigglytuff do not become as useful as tougher looking ones. Author Joseph Jay Tobin wrote that Wigglytuff was popular among young girls. GamePro‘s Emily Balistrieri called the Explorers of Time and Explorers of Darkness incarnation of Wigglytuff a “weird, weird Pokémon”.