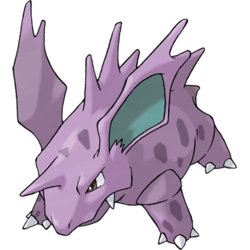 You caught a Nidorino!

Nidorino (ニドリーノ Nidorīno), known as the Poison Pin Pokémon, are a larger and stronger form that Nidoran♂ take when they gain enough experience. Nidorino look somewhat like a rhinoceros and a rabbit with needles and horns covering its body. Nidorino is more aggressive than Nidoran♂ and is quick to attack when it notices a threat; its large ears are always on the lookout. The diamond-hard horn on its head secretes a powerful venom and on impact with an enemy, poison leaks out. If it senses a hostile presence, all the barbs on its back bristle up. Nidorino is the male counterpart of Nidorina.

In the main Pokémon game series, a Nidorino can be found as wild Pokémon in the Kanto and Johto regions of the Pokémon world, and it can also be acquired when a Nidoran♂ grows past experience level 16 and is evolved into a Nidorino. It is also notable for being one of the first two Pokémon seen in the anime and in the intro to the game Pokémon Red.