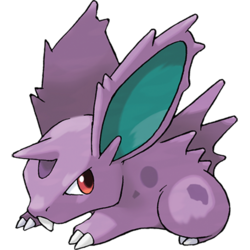 Nidoran♂ (ニドラン♂ Nidoran Osu), known as the Poison Pin Pokémon, are a species of poisonous rabbit-like Pokémon found in the Kanto, Johto, Sinnoh and Kalos regions of the Pokémon world. Unlike most Pokémon, female Nidoran are classified as a separate species from the males due to extreme differences in appearance between genders, such as the male having larger horns and completely different colors than the female. Male Nidoran are purple, and their horns secrete a powerful venom. The size of the horns determines the potency of the venom. Nidoran stiffens its large ears to sense danger. Male Nidoran are born far less frequently, and so the group will try to protect their future bull from harm. They are a fairly common sight in the Kanto and Johto regions, but in the Kalos region they only show up during a horde encounter.