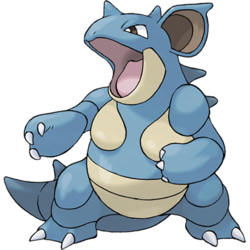 You caught a Nidoqueen!

Nidoqueen (ニドクイン Nidokuin), known as the Drill Pokémon, are a fully grown and developed species of female rabbit, porcupine, gorilla, and rhinoceros-like Pokémon. In the main Pokémon game series, a Nidoqueen can only be acquired when a Moon Stone item is applied to a Nidorina. Nidoqueen seem to be omnivores feeding on shrubs and fruit but they may snack on certain small Pokémon for protein. Also, Nidoqueen are much less aggressive than Nidoking and get along much better with others of their kind. Nidoqueen appears to be slightly weaker, but significantly more intelligent than Nidoking.

One of the most notable Nidoqueens in the Pokémon games is the one owned by Giovanni, the leader of Team Rocket in Pokémon Red and Blue, as well as its remakes,FireRed and LeafGreen. However, he did not use his Nidoqueen until he was battled at the Silph Co. building in Saffron City.