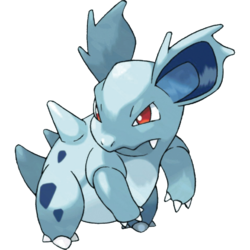 You caught a Nidorina!

Nidorina (ニドリーナ Nidorīna), known as the Poison Pin Pokémon, is comparatively larger than its pre-evolution, though she loses the forehead horn, whiskers, and incisor teeth. Nidorina is turquoise in coloration, with a pale underside. Nidorina’s poison spikes are larger, and retract when they are relaxed. She has also gained the ability to stand on her hind legs. Nidorina is the female equivalent of Nidorino. This is shown even in her name, which ends in a as opposed to o in Nidorino. A is traditionally a feminine vowel in the English language, particularly at the ends of names.

Nidorina seems to be more docile and relaxed than her counterpart Nidorino. She is a caring mother, chewing food for her young. Although she would rather not attack at all, she prefers attacks like clawing and biting. She seems to display close family bonds with others of her own kind, and becomes nervous when separated. However, when angered, a Nidorina can become a formidable foe, able to emit ultrasonic cries to confuse opponents. Nidorina live in expansive hot savannas and plains, sharing their home range with Nidorino. They are common in Kanto, but rare in Sinnoh.