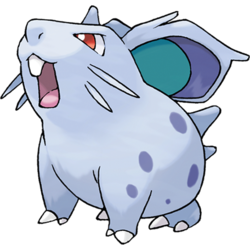 Nidoran♀ (ニドラン♀ Nidoran Mesu), known as the Poison Mouse Pokémon, are a species of poisonous mouse-like Pokémon found in the Kanto, Johto, Sinnoh and Kalos regions of the Pokémon world. Male Nidoran are classified as a separate species of Pokémon from the females due to differences in appearance between genders, such as the female being blue, instead of purple, and having smaller horns than the male. It should be noted that these were the first Pokémon to have known genders until the release of Pokémon Gold and Silver, although they remain as separate species to this date. This Pokémon protects itself with its venomous barbs. A female Nidoran birth is about 15 times more likely than a male one. However Nidoran♀ and Nidoran♂ cannot be bred together in the games, the same rule applies to their evolutions. They are fairly common in Kanto and Johto, but in Sinnoh the PokéRadar is required to find them, and in Kalos, they appear on route 11 (also called Miroir Way) during a Horde encounter.