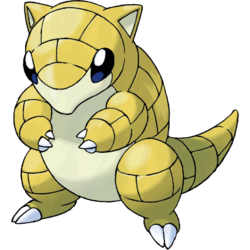 You caught a Sandshrew!

Sandshrew (サンド Sando, Sand), known as the Mouse Pokémon, are a species of brick-skinned mouse-like Pokémon found in several regions throughout the Pokémon world. Despite its name, Sandshrew’s appearance borrows more from the armadillo or the pangolin than from the shrew; its primary means of defense when threatened is to instantly curl up its body into a ball, leaving only its tough skin exposed. When it is rolled up like this, Sandshrew has the potential to withstand many attacks, as well as being dropped from a great height (also similar to hedgehogs). Sandshrew’s natural environment is buried in the sand in arid, sandy locations with very little moisture, such as a desert. It chooses this habitat to keep its hide as dry and tough as possible, while the sand also provides it with good camouflage.

In keeping with its physical characteristics, Sandshrew has high Defense in the video games, but low Speed. From Ruby and Sapphire onwards, it has the ability Sand Veil, which increases its evasion during a sandstorm. Sandshrew also appears in the spin-off game Pokémon Snap. In Pokémon Stadium, Sandshrew featured in its own mini game called “Dig! Dig! Dig!”, in which players need to dig to the underground well before the others.

A Sandshrew owned by A.J. is featured in the eighth anime episode, “The Path to the Pokémon League.” It had many notable traits, such as the ability to withstand water and its knowledge of Fissure, which it used to dispatch Team Rocket. A.J. and his Sandshrew appear as a cameo in Pokémon Yellow.