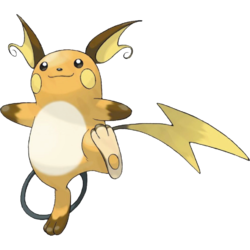 You caught a Raichu!

Raichu (ライチュウ Raichū), known as the Electric Mouse Pokémon, is a taller form that Pikachu takes when a Thunder Stone is applied. Raichu is a rather small bipedalrodent. It is able to run faster on all fours. Like Pikachu, Raichu has long ears and feet, and stubby arms; both species also have two horizontal brown stripes on its back. Its long, thin tail has a broad, lightning bolt-shaped end, which is smaller and blunted on females. Raichu is orange in color, with a white belly. Its paws are brown, as well as its toes, while the soles of its feet are tan colored. Its bifurcated ears are brown on the outsides and yellow on the insides, and end in a distinctive curl at their bottom-most point. Unlike Pikachu, with its distinctive red circles, the cheek sacs of Raichu are yellow. It has an aggressive nature if there’s too much excess electricity, and can charge up to 100,000 volts.

In the anime, Lt. Surge, the Gym Leader of Vermilion City, has a Raichu that defeated Ash’s Pikachu with its sheer power. After discussing evolution with Pikachu to match Raichu’s power (Pikachu refused to evolve), Ash used a strategy relying on Pikachu’s speed to defeat Raichu the next day.[151] Ever since that moment on, Raichu developed a newfound respect towards Pikachu. Raichu also appeared causing trouble for Pikachu and co. in Pikachu’s Vacation, along with Marill, Snubbull, andCubone.

Lt. Surge has a Raichu in Pokémon Adventures, which was first seen in Silph Co. but never participated in battles until fighting the Masked Man in his Mahogany Hideout, where it helped Surge break in and seemingly backed the mastermind into a corner, until his Houndour called upon dozens of wild Houndour to thwart Surge, instead.

Since it appeared in the Pokémon series, Raichu has received generally positive reception. It has appeared in several pieces of merchandise, including plush toys, figurines, and the Pokémon Trading Card Game. It was also included as part of a Burger King Big Kids’ Meal promotion.[152] The Chicago Sun-Times called Raichu an “old favorite.”[153] Loredana Lipperini, author of the book Generazione Pókemon: i bambini e l’invasione planetaria dei nuovi, commented that Raichu was not as hugely popular as Pikachu.[154] Ryan Omega, author of the book Anime trivia quizbook: from easy to otaku obscure, episode 1, commented that Raichu “isn’t that cute” and that this is why Ash did not want to evolve his Pikachu.[155] Pierre Bruno, author of La culture de l’enfance à l’heure de la mondialisation, compared the battle between Lt. Surge’s Raichu and Ash’s Pikachu to the Biblical story David and Goliath.[156] IGN editor “Pokémon of the Day Chick” noted that Raichu was “loved by many and despised by more,” though she clarified that the hatred for Raichu was nowhere near the hatred for Pikachu. She went on to describe it as “stupid-looking.”[157] GamesRadar editor Brett Elston commented that because of the high level of emphasis on Pikachu, it’s “easy to forget Raichu even exists.”