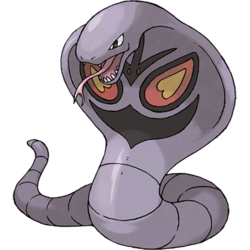 You caught an Arbok!

Arbok (アーボック Ābokku), known as the Cobra Pokémon, are a larger and stronger form that Ekans take when they gain enough experience. In the main Pokémon game series, an Arbok is only acquired when an Ekans evolves. Arbok is a reptilian with purple scales over most of its body. It has lost the rattle it had on its tail as an Ekans. Like a cobra, it can spread out its ribs into a hood. On its “hood”, it has a design much like an angry face. The frightening patterns on its hood have been studied and six variations have been confirmed.[140] Each design is native to a certain region.[141] It has a nasty bite with deadly venom. Terrifically strong, it is capable of crushing opponents by coiling its body around them and constricting. It can even flatten steel oil drums.[142] Rather vicious, Arbok are territorial. If it encounters an enemy, it raises its head, intimidating the opponent with the frightening pattern on its body, then they lash out at intruders with long fangs tipped with deadly venom.[143] With a vengeful nature, it won’t give up a chase after prey or an opponent, no matter how far, once it targets it prey.[144]

IGN’s Pokémon Chick wrote that Arbok was a favorite among players who like Arbok for being an enemy toward Pikachu and Ash Ketchum in the Pokémon anime. She added that Arbok had “personality to spare and can add a splash of much-needed color and originality to any team.” She also wrote that it is “one of the few pure Poison types that isn’t a butt-ugly mass of undefined tissue” and referenced Muk and Weezing as examples.[145] She also called Arbok her “beloved”.[146] She wrote that while she liked the Pokémon Seviper for being a snake, she will “always love Arbok just a little bit more simply because I was introduced and subsequently latched onto him first”.[147] IGN’s Pokémon of the Day Guy called it a “swell first Pokémon” and compared it to “Q-Bert‘s arch-nemesis”.[148] UGO Networks featured Ekans and Arbok as part of its “Snake Week” and expressed joy that Pokémon had “at least one snake”. They called Ekans a “killer Pokemon” and “a chalky purple snake with a penchant for being defeated”. They added that “as reward for sucking so consistently, Ekans was allowed to evolve into ‘Arbok,’ bigger, badder and more purple than ever” and that Arbok “didn’t fare much better than his lower form on the battlefield, but he sure looked cute whenever one of the more heroic Pokemon zapped the crap out of him”.