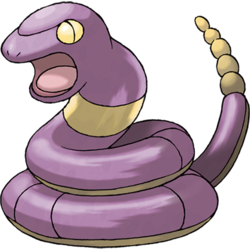 You caught a Ekans!

Ekans (アーボ Ābo, Arbo) is known as the Rattlesnake Pokémon. This reptilian Pokémon has a rattle at the tip of its tail, and is mostly purple while its underbelly, eyes, rattle, and the “bands” on it are yellow. They swallow whole the eggs of small bird Pokémon, such as Pidgey or Spearow.[134] Ekans are able to detach their jaws to swallow large prey whole, although this makes their bodies heavy.[135] Its highly poisonous fangs make it a hazard in the wild as they slither through the grass and unexpectedly strike.[136] Ekans also shares other characteristics as snakes, such as using its tongue to test the air for the presence of prey,[137] and shedding its skin.

UGO Networks featured Ekans and Arbok as part of its “Snake Week” and expressed joy that Pokémon had “at least one snake”. They called Ekans a “killer Pokemon” and “a chalky purple snake with a penchant for being defeated”. They added that “as reward for sucking so consistently, Ekans was allowed to evolve into ‘Arbok,’ bigger, badder and more purple than ever” and that Arbok “didn’t fare much better than his lower form on the battlefield, but he sure looked cute whenever one of the more heroic Pokemon zapped the crap out of him”.[138] Author Loredana Lipperini described Ekans as “treacherous.”