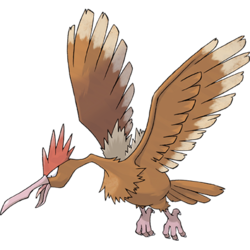 You found a Fearow!

Fearow (オニドリル Onidoriru, Onidrill), known as the Beak Pokémon, is a bird Pokémon that evolves from Spearow at level 20. Fearow is a large brown bird with a vulture-like neck. It has a large, long pointed beak and a red crown-like line of spikes upon its head. It also bears huge wings. All characteristics being a radical departure from its short-winged, stubby-beaked pre-evolved form Spearow. Fearow uses its great wings to catch air currents and effortlessly glide over large distances for as long as a day without having to land or rest. It flies high into the sky, and swoops down at its prey. By using a combination of its neck and beak, it has a large reach, allowing it to pluck bugs from the ground or easily pluck prey from soil or water as it swoops down. If it senses danger, it avoids it if possible.

In the animated series, the most notable Fearow is a leader of a flock of Spearow in Pallet Town, and attempts to drive away all the Pidgey in the area. Ash makes a stand against the Fearow, and realizes that it bears a grudge against him; it was the Spearow that Ash attempted to capture in the very first episode. Ash’s Pidgeotto fights the Fearow, defeating it when it evolves into Pidgeot. In the Electric Tale of Pikachu manga, Fearow is the first Pokémon Ash catches; similar to the first episode of the anime, Ash and Pikachu flee from angry Spearow, and when Ash protects Pikachu from harm, Pikachu dispatches the flock. Ash decides to take advantage of the situation, and catches the flock’s leader, Fearow. Professor Oak had a Spearow in the Pokémon Adventures manga, which later evolved into Fearow.