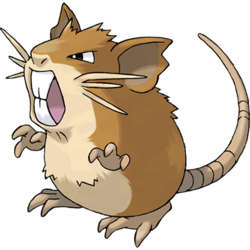 You caught a Raticate!

Raticate (ラッタ, Ratta), known as the Mouse Pokémon, is a larger and stronger form that Rattata takes when it gains enough experience. Raticate resemble large tawny rats with small black eyes, a yellow belly, a large cream-colored tail and the ability to stand on its hind legs. Raticate is mostly tawny in color with a cream-colored underside. In the main Pokémon game series, a Raticate is only acquired when a Rattata grows past experience level 20 and is evolved into a Raticate. Compared to a Rattata, a Raticate is far more of a predator, and the majority of its features are adapted for this purpose. Its whiskers give it balance and it slows down if they are cut off. A female always has shorter whiskers. Its webbed feet allow it to swim as it hunts prey, and its fangs are tough enough to topple concrete buildings by gnawing on them.

On the S.S. Anne, Ash traded his Butterfree for a Raticate but traded back towards the end of the episode. Cassidy has a Raticate that for a time served in her and Butch’s motto the role that Meowth serves in the motto of Jessie and James. In Showdown at Dark City, Raticate is one of the Pokémon belonging to one of the Trainers at Kas Gym. Mollie has a Raticate she used during the appeals round of the Gardenia Town contest in What I Did for Love. Butch of Team Rocket used a Raticate in The Ole’ Berate and Switch. In the Pokémon Adventures manga, a Rattata was Yellow’s first Pokémon. It later evolved into a Raticate.

GamesRadar editor Brett Elston praised Raticate as a great Pokémon early in the game, but criticized it for losing its usefulness later in the game. While she found it to be a Pokémon that has difficulties later in the game, IGN’s “Pokémon of the Day Chick” called Raticate a “nasty surprise” for opponents. She also called Raticate “one of the single most underrated Pokemon in existence”. 1UP.com’s Michael Vreeland commented that Raticate’s “Super Fang” technique was annoying for players when another trainer had it use it on their Pokémon. IGN wrote that while it has the same problems as Rattata does, it has a high attack power.