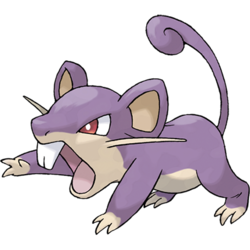 You caught a Rattata!

Rattata (コラッタ, Koratta) is known as the Mouse Pokémon. Rattata resemble small purple rats with large red eyes, cream bellies, paw soles and square fangs. Rattata has a long, slightly, purple curled tail. Rattata has large incisors and a long whisker on both sides that may be worn down by gnawing. Rattata have three-toed paws, which are the same color as its underbelly. They walk on four legs. Rattata has a large teeth, which grow constantly to gnaw on hard things to wear them down. Rattata are among the earliest Pokémon that can be caught by players, so much so that it is said that the presence of one Rattata indicates the presence of more than forty Rattata in the area. They make their nests almost anywhere and as extreme omnivores eat anything they can scavenge. A Rattata’s fangs grow continuously throughout its lifespan, so it whittles them down to a comfortable size by gnawing on hard objects. They are best known for their Quick Attack, which allows them to strike their enemy first, even if it is not their turn to do so.

Fellow GamesRadar editor Raymond Padilla criticized both Rattata and Raticate’s design for being too similar to its inspiration and described it as a “filthy rodent”. Author Loredana Lipperini wrote that despite its knife-like fangs, Rattata shares the land peacefully with Pidgey. Official Nintendo Magazine‘s Chris Scullion criticized how common Rattata was and described it as “rubbish”. IGN’s “Pokémon Chick” wrote that anyone that has never seen a Rattata has never played a Pokémon game. She added that because of its underwhelming nature, it is usually sent to the players’ PC box. The Escapist‘s John Funk called it a “familiar face”.