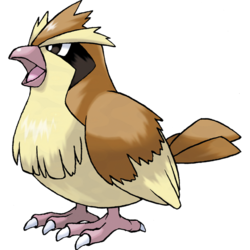 You found a Pidgey!

Pidgey (ポッポ, Poppo), known as the Tiny Bird Pokémon, resembles a small, plump-bodied bird. It is a brown color, with a lighter colored throat and belly. The tips of its wings share this cream color. Both its feet and beak are a pinkish-gray color. Its plumage is fairly nondescript, particularly compared to its evolutions Pidgeotto and Pidgeot. It has black markings around its eyes and a small crest of brown and cream feathers above its eyes. Pidgey are docile and prefer to avoid conflict. If disturbed, however, it can ferociously strike back and will use its wings to stir up clouds of sand in an attempt to distract its would-be opponent and escape. Pidgey also uses this technique to bring its preferred prey of small insects into the open. Pidgey seems to possess magnetoception, as it is capable of returning to its nest from any location without fail.

Loredana Lipperini, author of Generazione Pókemon: i bambini e l’invasione planetaria dei nuovi, commented that while Pidgey’s name was based on pigeon, it more closely resembled a sparrow. GamesRadar editor Brett Elston attributed Pidgey’s popularity to being commonly seen in the anime as well as being a solid Pokémon. The Independent described Pidgey as a “cute-looking monster” and a “moderately angry pigeon.”