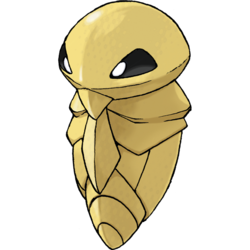 You found a Kakuna!

Kakuna (コクーン Kokūn, Cocoon), known as the Cocoon Pokémon, are pupal Pokémon found in the Kanto and Johto regions, of which its larval form is the worm-likeWeedle. They can evolve into the hornet-like Beedrill. Kakuna is a yellow, cone-shaped cocoon Pokémon. Kakuna has a dome-shaped head and black, triangular eyes. Within the shell, a Kakuna busily prepares itself for evolution into its adult form, and the amount of energy released by this process makes the shell hot to the touch. Kakuna can use a poisonous sting to defend themselves if disturbed.