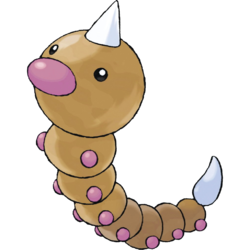 You found a Weedle!

Weedle (ビードル Bīdoru, Beedle), known as the Hairy Bug Pokémon, are larval Pokémon found in the wild early in the Kanto and Johto regions. They are very weak Pokémon that are captured to be evolved into their cocoon-like Kakuna form and eventually into the hornet-like Beedrill form. Weedle have little pink feet and a pink, round nose. Commonly spotted in the forests and grasslands, eating leaves, Weedle are well-protected from predators by sharp two-inch barbs on their heads which secrete a strong poison, and another stinger is on each Weedle’s rear. Sniffing with its big red proboscis, a Weedle uses its extremely acute sense of smell to find the types of leaves it eats. Often living in forests and grasslands, it eats its weight in leaves every day.

Loredana Lipperini, author of Generazione Pókemon: i bambini e l’invasione planetaria dei nuovi, commented that Weedle’s stinger made it appear more wild-like thanCaterpie. San Antonio Express News editor Susan Yerkes described Weedle as “disgustingly cute”. Destructoid’s Jim Sterling included it in his list of 30 “rubbish” Pokémon in Pokémon Red and Blue. He called it a “centipede thing” and criticized it for its “shitty, lazy facial features” such as what he calls the “‘whack a horn on it’ mentality of Goldeen and Seel”. He added that while Caterpie resembles a caterpillar, Weedle is a “joke”. IGN included Weedle as part of a poll of younger viewers on their favorite Pokémon. After the release of Pokemon GO, Weedle gained notoriety as an irritatingly common find, despite its generally useless nature.