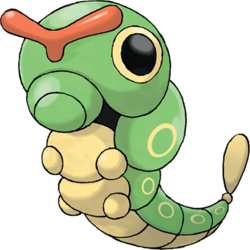 You caught a Caterpie!

Caterpie (キャタピー Kyatapī), known as the “worm” Pokémon, was designed by Ken Sugimori. Satoshi Tajiri, creator of the series, took heavy inspiration from his childhood hobby of insect collection in creating the various Pokémon species. Caterpie was based on the design of a caterpillar, specifically the caterpillar of theSwallowtail butterfly. Caterpie’s name is also derived from the word caterpillar. Caterpie have green skin with a yellow underbelly, yellow spots, and large redosmeterium protruding from their foreheads. Their green bodies are useful for camouflage in foliage, their eyes are patterned to scare away predators, their suction-cup feet allow them to climb any surface, and the osmeterium on their heads can project a horrid stench to repel predators. Caterpie is the smallest of all the original Pokémon, and grows in size by shedding its skin. Caterpie evolves into Metapod, and eventually Butterfree. Prior to Pokémon Platinum, It could only ever learn two attacks, Tackle and String Shot, and is severely limited in ability until it evolves.

In the anime, Caterpie was the first wild Pokémon Ash caught. He caught it without a Pokémon battle, which Misty attributed to Caterpie’s weakness. Caterpie was quite fond of Misty, but she disliked it due to her fear of Bug-type Pokémon. Caterpie was the first Pokémon Ash sent out against the next Pokémon he tried to capture,Pidgeotto. With a large disadvantage against the Flying-type Pokémon, it was beaten severely. Despite this, when Team Rocket appeared to attempt to steal Pikachu, Ash sent out his weakened Caterpie against them, taking down both James’s Koffing and Jessie’s Ekans by itself using String Shot and Tackle, evolving into Metapod. This Metapod eventually evolved into Butterfree, which left Ash to be with other Butterfree.

Caterpie was featured on a postage stamp series in Great Britain. Caterpie was part of a series of plastic toys released of the original Pokémon. In the video games, Caterpie has received mixed reception; while it is often described as cute, it is also criticized as being useless. An IGN editor called “Pokémon of the Day Chick” expressed sympathy for Caterpie, in that most players catch the Pokémon early on in the game, but inevitably discard him in favor of other, more powerful characters.Multiple other IGN editors acknowledged Caterpie’s practical uselessness, one calling it “unbelievably pathetic.” IGN further likened the Pokémon to an “oversized tomato-horn-worm-lookin’ thing” that deserved very little respect. In another article, IGN called Caterpie “really cute,” adding that the appropriate reaction to someone using Caterpie in battle is to “laugh out loud, then take it out with pretty much any Pokemon [sic] you can find.” The same reviewer expressed the belief that the game designers worked to ensure that Caterpie would “always suck beyond a shadow of a doubt” and called it the second worst Pokémon in the game IGN praised the Pokémon’s name and that the -pie suffix makes it cute. GamesRadar theorized that much of Caterpie’s popularity stemmed from its central appearances in the Pokémon anime’s first season. However, they themselves claimed to be tired of Caterpie, and the work it took to use it effectively. The book Gaming Cultures and Place in Asia-Pacific cited it as an example of a common recurring and weak element in the games, whose presence rather than function was to emphasize the exclusivity and strength of other, rarer creatures for players to find.