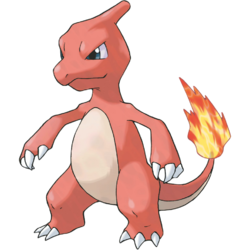 You caught a Charmeleon!

Charmeleon (リザード Rizādo, Lizardo) is the evolved form of Charmander, and the pre-evolved form of Charizard. Charmeleon, known as the Flame Pokémon, are bipedal lizard Pokémon with yellow bellies and soles, three clawed feet and hands, and a flame at the end of their tails. They are darker-skinned than Charmander, possess a bumpy horn on their heads, and take on a more intimidating appearance. Charmeleon are excessively savage and short-tempered by nature, and they are powerful fighters due to their temperament. The flame on its tail may burn a bluish white when the Pokémon is excited, and the air temperature often raises to very high levels when the tail flame is waved around. It first appears in Pokémon Red and Blue.

Since appearing in the Pokémon series, Charmeleon has received generally positive reception. It has been featured in several forms of merchandise, including figures, plush toys, and the Pokémon Trading Card Game. Charmeleon, along with Pikachu, was featured as one of two Pokémon-themed costumes released in 1999. Grey School of Wizardry faculty member Ash DeKirk compared Charmeleon, along with Charmander and Charizard as “fire-breathing dragons”. Author Loredana Lipperini described Charmeleon as an “awkward teenager, full of potential but also of uncertainty.” The SCP Journal commented that the Charmander line, which includes Charmeleon, represent the three stages of a dragon’s life. Author Joseph Jay Tobin used the line as an example of a line whose names are “rich in cute puns and in a pseudo-Linnean attention to family and genus”. GamesRadar editor Brett Elston compared Charmeleon to Ivysaur in how they both lack the cutesy appeal of their previous forms, but are not as intimidating as their next forms. He also comments that Charmeleon, in spite of being named after the chameleon, “sticks to one lifestyle – burning rage.” In a poll by Official Nintendo Magazine, Charmeleon was voted as one of the best Fire-type Pokémon. They stated “Charmeleon may have lost Charmander’s cheery smile but it gained so much in evolution”. The Daily Cardinal called Charmeleon the “ugliest dragon of the bunch”.