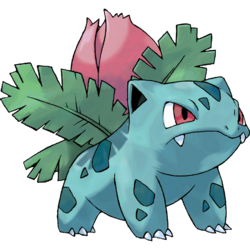 You found an Ivysaur!

Ivysaur (フシギソウ Fushigisō, Fushigisou), known as the Seed Pokémon, represents the evolved form of Bulbasaur, one of the three starting Pokémon available to players in Pokémon Red and Blue and their various remakes; it evolves into the final form of Venusaur. Aside from becoming taller and heavier than Bulbasaur, its trademark bulb becomes a pink flower-bud, and four leaves now appear at the base of this bud. The Pokémon’s legs are more stout, allowing it to hold up the bigger bulb, yet limiting its previous ability to stand on its hind legs. Its eyes now look more aggressive and intimidating. As before, Ivysaur and its bulb share a mutualistic relationship; bathing in sunlight allows both to continue growing. Eventually, the bud will give off a sweet scent, a signal that it will bloom soon, and that its host will evolve. An Ivysaur will spend more time bathing in sunlight in order to reach evolution.