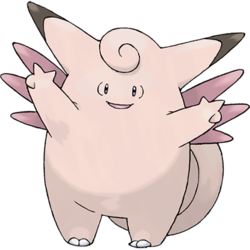 You caught a Clefable!

Clefable (ピクシー Pikushī, Pixy), known as the Fairy Pokémon, is similar to Clefairy in appearance. It is larger than its pre-evolved form, with prominent ears and a pair of jagged wings on its back. Clefable inhabit remote mountainous areas and generally any environment that has sufficiently little ambient noise. Clefable’s hearing is extremely sensitive – it is said that it can discern the sound of a pin falling 1,100 yards (1,000 m) away, so it is averse to living in areas with sound pollution (compare withWhismur).

Clefable are also extremely timid, and rarely seen in the wild. They avoid all contact with outsiders. Even sensing the presence of others in the area (which is fairly easy thanks to their prodigious hearing) will cause it to run and hide immediately. They will, however, come into the open on quiet, moonlit nights to take a stroll on a lake.

Clefable’s wings are probably not fit for real flight, but they allow it to move in a skipping, bouncy manner as if it were walking on the moon’s surface. They can even walk across the water’s surface this way, so when it takes the aforementioned stroll on the lake, it literally takes a stroll on the lake. Clefable’s wings, its hovering walk, its timidity and elusiveness have led them to be categorized as a type of fairy in the Pokémon world.