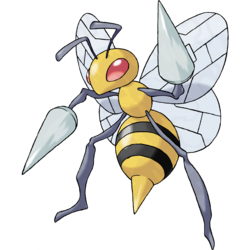 You found a Beedrill!

Beedrill (スピアー Supiā, Spear), known as the Poison Bee Pokémon, are fully developed, wasp-like Pokémon that have hatched from their pupal Kakuna forms. Although they are hornet-like, they only have four legs, the front two tipped with long stingers. It has veined wings, and another stinger on its abdomen that contains its most potent venom. Beedrill are extremely territorial, and will be set off by anything that approaches a Beedrill nest. When angered, Beedrill attack in a furious swarm.

In comparing Beedrill to Butterfree, Brett Elston argued that both were there to demonstrate evolution to new players, adding that Beedrill focuses more on dealing damage than Butterfree does. He notes that Beedrill, like Butterfree, will be replaced with more powerful Pokémon. Boys’ Life named Beedrill the third of five “coolest” Pokémon from Pokémon FireRed and LeafGreen.