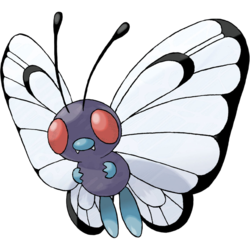 You caught a Butterfree!

Butterfree (バタフリー Batafurī), known as the Butterfly Pokémon, are fully developed, butterfly-like Pokémon that have hatched from their pupal Metapod forms. Butterfree resembles a vaguely anthropomorphic butterfly. Unlike true insects, it only has four legs, which are a pale blue color. It has a nose-like structure which is a similar color. Its body’s coloration is a darker purple-blue. It has large veined wings which are white with black markings. These markings can help distinguish male and female individuals. It has large compound eyes which tend to be a reddish color. Butterfree feed on honey from flowers, and they rub the honey onto the hairs on their legs to transport the honey back to their nests. Like members of the order Lepidoptera, Butterfree’s wings are covered in fine scales that are water-repellant and allow it to fly in heavy rains, something many other insect Pokémon such as Masquerain cannot do, and are also coated in toxic dust that can be directed at an opponent in battle through wing-flapping.