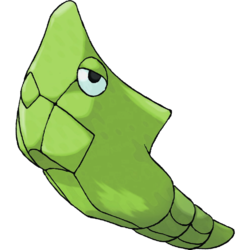 You caught a Metapod!

Metapod (トランセル Toranseru, Toranseu), known as the Cocoon Pokémon, are pupal Pokémon found in the wild early in the Kanto and Johto regions, of which its larval form is the caterpillar-like Caterpie. They can evolve into the butterfly-like Butterfree. While Metapod is classified as a cocoon Pokémon, it bears more resemblance to a chrysalis. A Metapod’s exterior is regularly hardened to protect its soft and tender innards while undergoing metamorphosis to eventually become a Butterfree. To conserve energy for this event, the Metapod barely moves. While this shell is said to be as hard as steel, a large sudden impact could cause its vulnerable body to pop out, leaving it completely exposed.